Day 14
1.5 hours of training on organic agriculture for young farmers in Mexico

Four pigs do make a summer

Newspaper journalist Donaciano Perdomo’s income is quite low. While he is at work, his wife Esperanza Aldana Portilla takes care of their three children. The only thing they can provide their children with is a small plot of land which, however, is currently uncultivated. Mexico is facing uncertain times, youth unemployment is high. That makes these fallow fields a new opportunity for their offspring. The son Ernesto has made the decision to become a farmer. When he left to start his training, Mr Perdomo wrote a letter to his son: “Netito, the courageous take advantage of opportunities to grow professionally and spiritually. Imagine what you will learn and encounter in the next two years. What you will learn about our Mother Earth, how to take care and protect her from all these insatiable interests that want to make money out of everything. Sadly, they have a lot of power, but once the last fish has vanished from the rivers, they will understand that money isn’t the most important thing.

At the training centre Agrosol young farmers are extensively trained in organic farming, processing and marketing.

Number of lessons in organic farming for the young people that can be funded by the donation.

Up to 20 trainees who would otherwise not be able to cover the cost, are supported with scholarships.

As in many parts of the world, violence and corruption hold sway in Mexico. Rival gangs have been battling it out for years to gain control of the drug trade. Since 2006, this has killed over 17,700 people. Almost 30,000 are still presumed missing. Veracruz holds a sad first place in many statistics: It is in the grips of a bloody conflict between the cartels Los Zetas and Jalisco Nueva Generación. According to NGOs, almost two thirds of the missing persons cases are in Veracruz. In early March 2017, one of the largest mass graves in Mexico’s history was discovered here. The former governor of Veracruz, Javier Duarte (2010-2016) is on the run following accusations of corruption and embezzlement. 52.5 per cent of the people live below the poverty line. 26 per cent of children and young people between six and 15 years old lack primary education. Youth unemployment is high. In the early 20th century, Verycruz was thriving because of coffee exports. But coffee and other key export products such as maize have seen a decline in prices in recent years. Smallholders are coming under pressure: Because conventional crops will barely support their livelihood, they are vulnerable to cartels offering them comparatively large amounts of money to cultivate drugs.

At Agrosol, the training centre for organic farming and integrated practices, up to 20 trainees take a two-year course in organic farming, animal husbandry, processing of farming products as well as bee keeping. The trainees are children of smallholder families or from families with small fallow plots in Veracruz. Their parents’ land is a future prospect to these young people: If properly managed, it can provide a basic livelihood for the families and generate income. Properly made sausages and meat from four pigs can carry a family through one summer and make them resistant to the advances of the drug cartels. 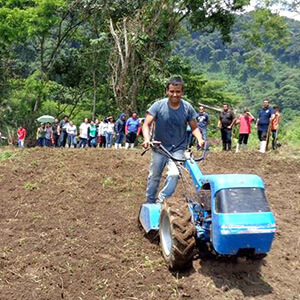 There are two sides to Mexico: A modern and globalised economy and a stable democracy on the one hand, and half the population in absolute poverty, drug wars and violence on the other.