Support for an orphan orangutan on Borneo

The rainforest on Borneo is one of the world's most precious natural resources. It is one of the oldest and most untouched forests in the world. Borneo alone is home to over 1,600 different species of mammals, birds, amphibians and fish (WWF, 2019). But the pressure on the forests is growing and the available area is shrinking. The main causes are palm oil plantations and the demand for palm oil for bio fuels, chocolate bars and cleaning products. In addition, animals that are acutely threatened with extinction and live in the forests are often hunted as trophies, trapped and traded illegally worldwide as status symbols. Orangutans are particularly sought-after. Actually, the orangutans have no natural enemies on Borneo. But man destroys their natural habitat and forces them to repeatedly come into contact with humans in search of food. The resulting conflicts often end with the death of adult orangutans. Their babies remain abandoned and the chances of survival for the young animals are slim. In various rescue centres, the animals are then taken in and medically treated, cared for and, after years of rehabilitation, released into safe rainforest areas. However, in order to grow big and strong enough to go on this journey, the animals need a lot of fruits and vegetables.

Fruits and vegetables for threatened Borneo orangutans in Indonesia.

Staff of the BOS Foundation buys fruits and vegetables to feed the orangutans at the rescue centres.

Number of rations of fruits and vegetables provided to orangutans at the BOS rescue centres.

Orangutans are provided with wholesome food and can develop in such a way that they can one day return to the wild.

Orangutans are released into protected and safe forest areas where they can live freely and establish new populations.

The number of orangutans is declining dramatically. Between 1999 and 2015 alone, more than 100,000 animals have disappeared (Voigt et al. 2018). This is why the World Conservation Union (IUCN) has upgraded the Borneo orangutan to the category of "critically endangered species" on its Red List in 2016 (Ancrenaz et al. 2016). The main cause of this dramatic development is the deforestation of the rainforest, which today is the habitat for the remaining 54,000 orangutans. From 1973 to 2010 the habitat has declined by 56 per cent, and 39 per cent of this loss will have gone forever. The latter corresponds to an area larger than Portugal. The rainforest is being cleared for palm oil plantations, timber and mining. The size of such plantations alone grew from 6,000 square kilometres in 1985 to 140,000 square kilometres in 2015 (WWF 2017). Orangutans do not live in larger social groups. Only the mother and child remain together for up to eight years. When a mother and her child are separated, this causes a dramatic change in the development of the babies. An orangutan baby can thus easily become a victim of pet traders. Many of the animals are sold on the black market and kept privately as pets, although their keeping, sale or killing is strictly prohibited in Indonesia (White, Lanjouw, and Rainer 2015; Voigt et al. 2018).

With your donation you make it possible to provide fruit and vegetable rations to orangutan orphans. They are taken to the rescue centres of the organisation BOS and prepared in a multi-stage rehabilitation process over several years for a life in the wilderness. The babies are first cared for by human foster mothers in the forest kindergarten. Since they have lost their mothers and can no longer be suckled, they are supplied not only with soy milk but also with fruits and vegetables. At the rescue stations, the animals develop all their skills, such as climbing safely along the giant trees of the jungle. After an average of eight years of rehabilitation, the small babies become independent orangutans who are then released into the BOS nature reserves with an important mission: ensuring the survival of their species. 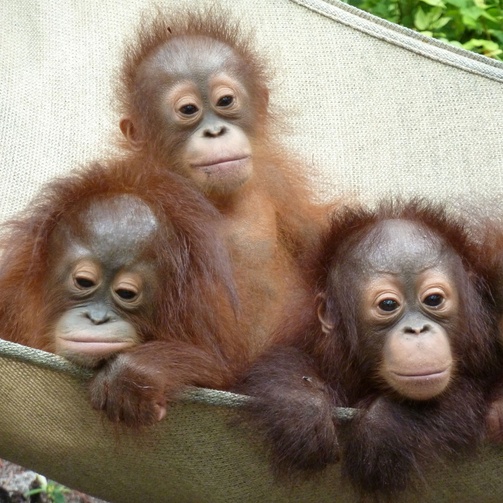 With about 27 million inhabitants, Indonesia is the largest island nation in the world. In Asia, it is currently at the top of the ranking of countries with the most species threatened with extinction.