An oasis for orangutans and pygmy elephants

The 50 largest tropical trees in the world are found in Sabah, in the Malaysian part of the island of Borneo. The tallest of them reaches 100.8 metres - about six times higher than a sperm whale is long. The rainforests on Borneo are one of the largest CO2 reservoirs in the tropics and therefore indispensable for our climate. But even in the rainforest of Sabah, massive clearing has taken place in recent years to make room for palm oil plantations. Palm oil is an important ingredient in many of our everyday products. It can be found in biodiesel, chocolate bars or ready-made pizzas. On the island of Borneo alone, the palm oil industry was responsible for 39 per cent of the forest decline between 2000 and 2018. In total, more than 6.3 million hectares of tropical forest were cleared on Borneo during this period (Reuters, 2019). The plantations are destroying the habitat of animals and plants, fragmenting protected areas and restricting the movement of species such as pygmy elephants and orangutans. They are thus endangering one of the most important ecosystems on our planet.

Linking of nature reserves in Malaysia to protect endangered species.

Planting trees to transform a palm oil plantation into rainforest and to link two nature reserves.

Number of newly planted hectares of wildlife habitat for orangutans and pygmy elephants.

An 800-metre green corridor will be created, linking two nature reserves with a total area of 200,000 hectares.

Enlarging the habitat of many endangered species and enhancing Malaysia's biodiversity.

The state of Sabah is Malaysia's largest producer of palm oil. Over 21 per cent of the state is covered with palm oil plantations (Statista, 2020). The palm oil industry has developed into an industry worth billions in Malaysia and Indonesia. Oil palms (Elaeis guineensis) have a particularly high yield per area compared to many other plants whose fruits are used to produce oil (such as rapeseed or coconut) (Woittiez, 2017). They grow particularly well in tropical latitudes and are therefore in direct competition with the last remaining tropical rainforests. For many countries in the tropics, the cultivation of palm oil is an important part of their economic development strategy. However, global demand for palm oil has claimed a major victim, particularly in Borneo: 34 per cent of the forests, some of which are over 130 million years old, were destroyed between 1973 and 2015 (Gaveau et al., 2016). This destruction leads to irreversible damage to vulnerable ecosystems and catastrophic declines in their biodiversity. Habitat loss also leads to conflicts between humans and animals. In their search for food, for example, pygmy elephants and orangutans often leave their dwindling forests and get lost in palm oil plantations. Here they are often regarded as "pests" and fall victim to poachers. As a result, species that are already endangered are made even more vulnerable by palm oil cultivation. The populations of free-ranging orangutans, pygmy elephants and Banteng cattle are declining more and more. Many species are acutely threatened with extinction. This situation has already led to the disappearance of the Sumatran rhino. The last known specimen in Malaysia died on 23 November 2019, making the species extinct in Malaysia. According to the nature conservation organisation WWF, there are only about 80 Sumatran rhinos left in Indonesia (Die Zeit, 2019).

With today's donation you support the reforestation of a wildlife corridor between the nature reserves Tabin (123.000 hectares) and Lower Kinabatangan (80.000 hectares). Here an 800 metre-wide green forest corridor is being created on a deserted palm oil plantation. The linking of both forest islands counteracts the habitat's fragmentation. The wildlife corridor thus increases the chances of survival of endangered species such as the pygmy elephant, orangutan and Banteng cattle and serves as a model project for the successful rehabilitation of palm oil plantations. The project will plant 8,250 tree seedlings, including the offspring of jungle giants, fruit trees and fast-growing pioneer species that quickly form a canopy and drive back grasses and other plants. As soon as the new canopy is high enough, the remaining palm trees will be removed. 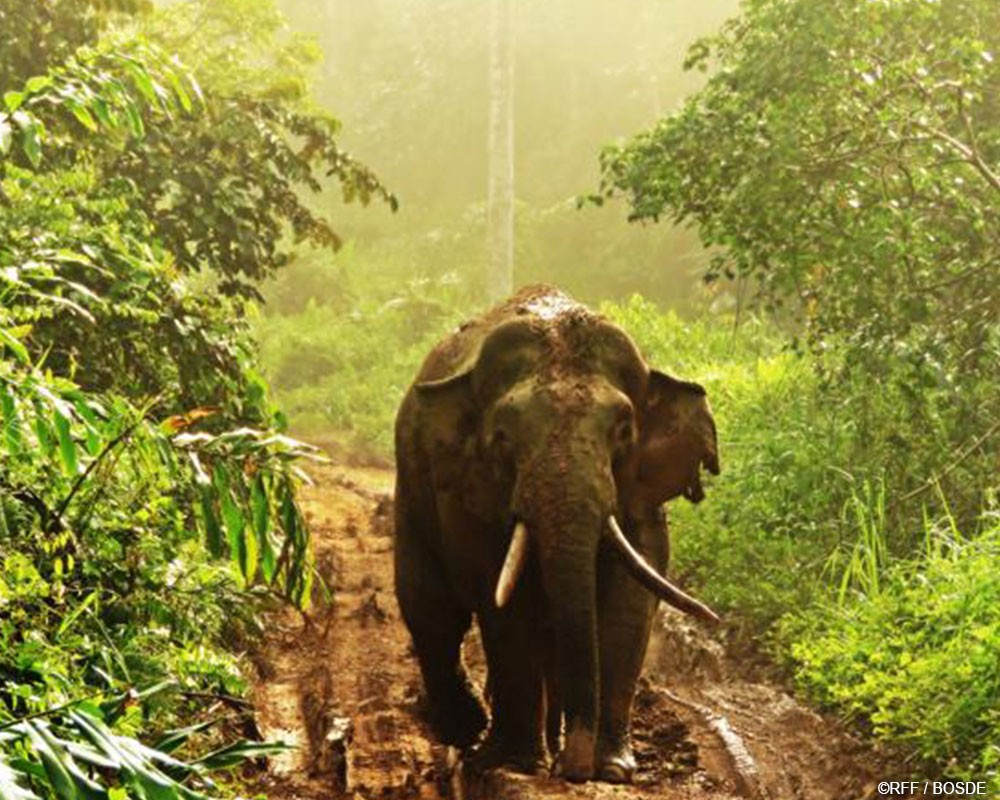 Mount Kinabalu in Sabah is the highest mountain in South Asia. It is home to over 5,000 plant species, 40 per cent of which are endemic.